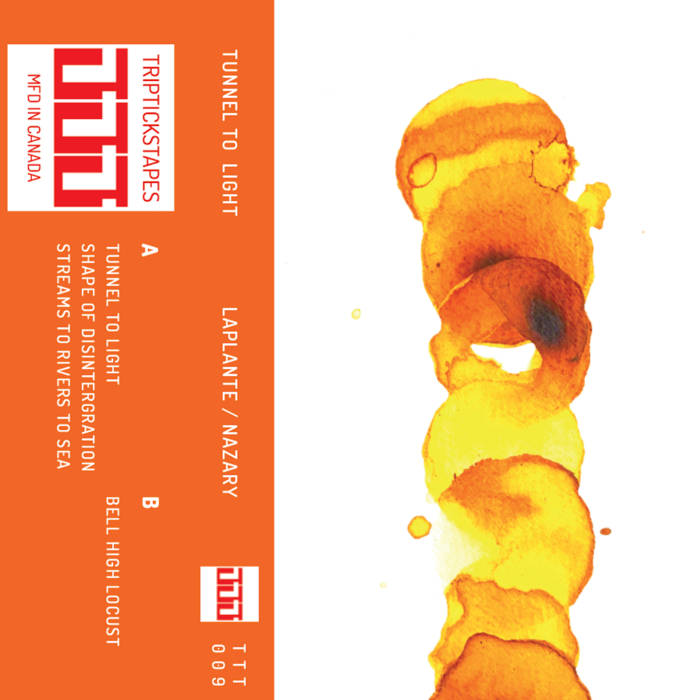 Tunnel To Light is the new recording from saxophonist Travis Laplante and drummer Jason Nazary; an intimate document of a 16 year musical friendship.

Tunnel to Light’s side A consists of three improvised acoustic performances, recorded in Vermont during the Spring of 2021. After both musicians had spent close to a year with extremely limited in-person musical connections, the longing to play in person together felt urgent. The timing of the recording represents a celebratory moment; a return to sharing and uniting sound in the same space together. The acoustic improvisations on Tunnel to Light all have an uncanny quality of musical distillation inside of them, as if the essences of the improvisations are further revealing themselves as each moment passes. This quality is a result of the countless hours Laplante and Nazary have spent deeply listening to each other, cultivating a rare musical sensitivity even within wild and dense sonic territory. The players seem to be able to understand what WILL happen in this way that allows the listener to forget that the players have only the present and past to guide them; they have no idea what will happen! And that's the risk, and the surprise when the resulting sounds are so fused.

Bell High Locust, the final track of Tunnel To Light, was in fact the first piece of music made for the record. While side A finds the two musicians improvising in the same space & time, side B was created remotely, each contribution recorded individually, at home, during the height of the pandemic. The original framework of the piece was improvised by Nazary, experimenting with live electronics & various close mic'd percussion textures, from bowed cymbals to beaded shakers to multiple woodblocks and cowbells. The result was an ever evolving sonic tapestry that created the foundation for Laplante's contribution, also improvised in one take at his home in Vermont. Despite being recorded a month apart, the two performances sound as one, the musicians displaying a near telepathic bond. Finally, this composite was filtered through Nazary's unique production aesthetic, subtly shaping the piece into a hyper realistic, psychedelic landscape that is a distinctive addition to both musicians' catalog.

TRAVIS LAPLANTE is a saxophonist, composer, improviser, and qigong practitioner living in Brooklyn, New York and southern Vermont. Laplante leads the acclaimed tenor saxophone quartet Battle Trance and Subtle Degrees, his duo with drummer Gerald Cleaver. Laplante also recently composed long-form works for new music ensembles the JACK Quartet and Yarn/Wire while performing alongside them. Laplante is also known for his raw solo saxophone concerts and being a member of the avant-garde quartet Little Women. He has performed and/or recorded with Trevor Dunn, Ches Smith, Peter Evans, So Percussion, Michael Formanek, Buke and Gase, Ingrid Laubrock, Darius Jones, Mat Maneri, and Matt Mitchell, among others. He has toured his music extensively and has appeared at many major international festivals such as The Moers Festival (Germany), Jazz Jantar (Poland), Saalfelden (Austria), Jazz em Agosto (Portugal), Earshot (Seattle), Hopscotch (North Carolina), and the NYC Winter JazzFest. As a composer, Laplante has recently been commissioned by the Lucerne Festival (Switzerland), the JACK Quartet, Roulette (Brooklyn, NY), Yarn/Wire, and The Jerome Foundation. As a qigong student of master Robert Peng, Laplante has undergone traditional intensive training. His focus in recent years, under the tutelage of Laura Stelmok, has been on Taoist alchemical medicine and the cultivation of the heart. Laplante is passionate about the intersection of music and medicine. He and his wife are the founders of Sword Hands, a qigong and acupuncture healing practice based in Brooklyn, New York and Putney, Vermont.

JASON NAZARY is a drummer/producer/improviser/composer from Atlanta and based in Brooklyn. Jason has been a force in New York's creative music scene for over a decade. Fascinated by the intersection of acoustic & music, Nazary has released 2 EPs and most recently a debut record, entitled Spring Collection, that explore the use of acoustic drums as trigger and control sources for electronic instruments in the context of raw, minimalist composition and improvisation. On Spring Collection, the Wire says - "wonky and woozy, teaming with detail, this is truly cosmic music." He also co-leads a number of ensembles, among them the dystopian electro noise duo Clebs with singer Emilie Weibel, and Anteloper, an improvising modular beat shredding duo with trumpeter/juno explorer Jaimie Branch. He is also well known for his work in the avant garde free jazz soul quartet, Little Women. Nazary has also performed & recorded with celebrated musicians from across the musical spectrum, including Helado Negro, Olga Bell, Darius Jones, Joe Morris, to name just a few. He has also performed internationally at festivals such as La Villete (France), Moers (Germany), Jazz Jantar (Poland), Saafelden (Austria), Jazz em Augusto (Portugal), Jazz Cerkno (Slovenia), Winter Jazz (NYC) and Sonic Transmissions (Austin, TX).

special thanks to Dave Snyder for lending the recording equipment