Resting In the Heart of Green Shade 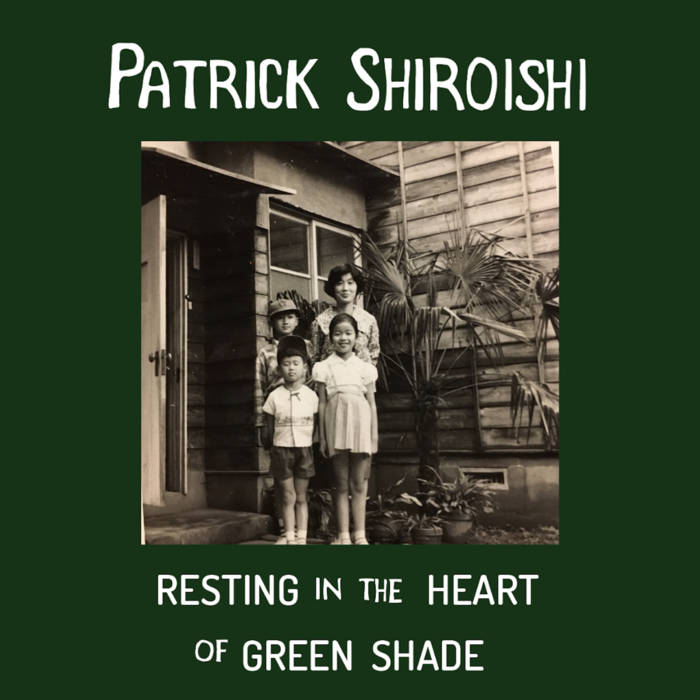 Patrick Shiroishi is a prolific voice in the burgeoning world where experimental music and jazz playfully overlap. He is constantly collaborating with groups, including his own collective, Danketsu 10. These collaborations find him typically adding lyrical voicings through his woodwinds, predominantly the saxophone. On Resting in the Heart of Green Shade, Shiroishi goes solo, and does so with provocative aplomb.

These four explorations of tension and release, of melody and dissonance, become a study of potential for the arrays of personality that await activation inside these instruments. These four offerings are character studies.

On “Words Turn Into Stone” alto saxophone becomes a conversational presence and absence. Moving between blistering dissonant arpeggios, strained halftone slow motion harmonic bellows, and at times utterly noteless rattles of pads and keys being slammed in an otherwise silent room, there is a spellbinding sense of dynamism at play that only comes from a deep intimacy with an instrument. Shiroishi is a storyteller here, and the story is one where a shady hero goes through twists and turns. The tension of the track suddenly opens up at the end into a bubbling set of fifths that feel like Reich riding off the rails before peeling off into chattering pads and honking blows separated by witty silences. A kind of victory of personality.

“Orange Pedals” dwells in far more pastoral and nostalgic terrain before turning into an almost humorous piece. The soprano sax here lilts at places in soft and flowing phrases, then squeals like grass pinched between the thumbs. Suddenly it begins to ruffle and chitter, almost giggling in pizzicato. There is a playful and joyous sensability here, a kind of comedic inflection, even though the demands of this skillful playership are anything to laugh at.

“Paper Mountain” announces its sturdy presence, this time on tenor saxophone, with timbrel foghorn blasts and timed silences in a sequence that then pivots into delicate harmonics. There is a dual presence here too, of the mountain that sits firmly and the sky that it juts up into. The air that circles the peak is thin and wispy though the landscape is unmoving and craggy.

Shiroishi pushes his compositions, his characters, his instruments, into a state of crisis; on “Paper Mountain” there is a storm that breaks in and out, coming in blasts and fluttering away into silences. Cascading half-played voicings roll down from the peak and into the canyon below where they bounce and refract as the chasm swallows the melody.

On “The Very Heart of Things” Shiroishi returns to alto sax, this time conjuring a patient and stoic portrait in minor keys. This track is the most lyrical of the four, though not compromising Shiroishi’s skillful sense of daring. He turns a familiar musical phrase inside out, upside down, and around itself through his complex playership. The character here is maudlin, self-critical, doubtful.

Solo instrumental works can invite a structural sensibility to some; in the vacuum that befalls a solo recording when the player stops, there can be a fear of rest, of silence, of untouched space that demands a kind of hyperactivity to fill those beguiling emptinesses. Shiroishi huffs into those silences, he pulls back in the crises, he leans in and tells jokes, he asks questions. Though the pieces are far from structural, they are profoundly intimate and cunning in how they capture the dynamic character of these instruments and the air coursing through them.

photograph of my mother with her brothers and mother